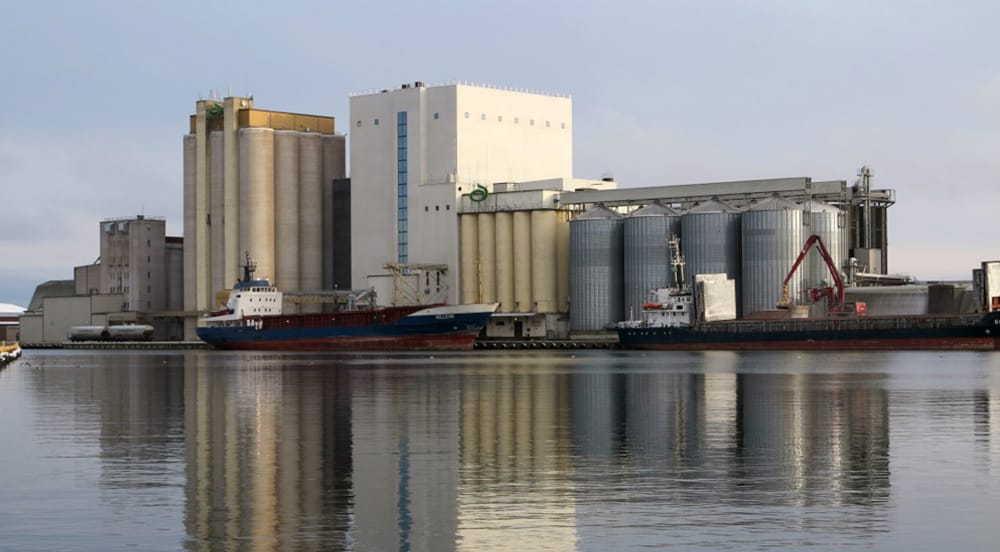 Kalmar Lantmän is part of feeding production leaders in Sweden and recently, has a new food factory built by Van Aarsen. Today, it is the food factory the most modern of the world !

50 million euros in a factory in Kalmar

New factories of livestock food are rare in Europe. The Swedish cooperative group Kalmar Lantmän has just realized an investment of 50 million euros to build a factory on the southeast coast of the country, instead of two former production tools. A project carried out by Van Aarsen which showed this flagship around put on the banks of a strait in southern area of Baltic Sea.

The case goes back to 2009 when the Dutch parts manufacturer Van Aarsen invited its Scandinavian clients to visit the factory of Satarehu newly implanted in Finland. That year, the Swedish cooperative Kalmar Lantmän decides to build a new production tool to replace its two neighbouring factories placed on Kalamar’s port, in the Province of Smaland, on southeast area of the country.

“The Kalmar Lantmän cooperative has 1846 members, in the south of Sweden and represents a turnover of 140 million euros, présents Rejne Erixon, the production manager of Kalmar Lantmän factory food. Our two factories were situated on the port area of Kalmar and produced in total 244 000 t of food per year, in shift work at a 7-days-per-week pace. We were totally full.” The factories produce about 100 000 t of food for bovines, as much as for poultry and 44 000 t of food for pigs. The cooperative boasts a market share of 80% in the South of th country : the competitors are remote and approach expenses are prohibitive. “Our first factory was in 1960’s ; another one had just complete it in 1980’s. We had specialized the first one for pigs and and poultry, the second one for ruminants, reminds Rejne Erixon. But our needs changed : our poultry activity had progressed a lot, from 32 000 t in 1980’s to 100 000 t in 2010 ; the profile of dairy farming had changed very much : we feed the same number of cows as 25 years ago, but the average size of farms had increased from 25 cows to 100 cows, triggering disruptions in ways of feeding espacially an increase of the portion concentrated producted in ration.”

Moreover, the factories are close to the city, to the university and to the historical monument of the castle of Kalmar. The cooperative faced up to high environmental and societal requirements. Especially as the space is at a premium : the port is not expandable and Kalmar Lantmän did not plan to move : a part of his supply of provisions is from the sea. The receipt and stockage tool of raw material would be able to be reused and connected to the new factory.

“In June 2010, Kalmar Lantmän accepted our prpject, among 3 other compagnies able to realise a construction work of this magnitude, explains Hans van der Weijden, business manager in Van Aarsen. We have made the Van Aarsen plan our first choice  because it was compacted : the factory took up a floor space under a third in comparison with the competitors plans. Also, we have taken into consideration the choice of machines which allowed to reduce the investment cost per ton produced. Finally, Van Aarsen is a small company which have met our way of quick decision taking, apart from bureaucratic behaviours.”

The Van Aarsen research unit carried out the project from the beginning of design to building finalisation. “It is a decision which we do not regret because those are the same engineers who have imagined, drawn,, carried out the building and executed the tools. Indeed, there was very few change between the initial project and its achievement.”

The project was signed in February 2012 (representing the most important independent order ever signed by Van Aarsen) and the building work started in April 2012. Twenty-four months later, in April 2014, the factory was inaugurated officially by the Prince Carl Philip of Sweden. “The building work has never stopped, whatever climatic conditions were.”, says Piet van Bommel, business manager in Van Aarsen.

The building of receiver pits and foundations were made first and after the factory was built from October. The machines were installed in each level with the raising of the building. The installation was out of water and out of air in May 2013. After a run-in period, the factory reaches now his cruising speed for producing 245 000 t /an in work shift but in only 5 days per week : “Our capacity of production is 100 t of food/h. We have grown in flexibility, admits Rejne Erixon. Especially as we decrease from two production teams to one. The factory works with two day-time operators, and one at night. The control could be made from digital tablet in different floors thanks to Wi-Fi coverage of the site ; the operator does not need to go back in the checkpoint.”

The factory has 5 production lines entirely autonomous.  “We have been particularly vigilant about hygiene control, continues Rejne Erixon. Pellets mills, as mixers, are each installed separately in a separate rooms and physically isolated in order to avoid any cross-contamination.” Sweden has adopted specific regulations concerning hygienisation and each granulation line is equipped with hygienisor.

The factory works with a preliminary milling and has 2 hammer mills, with an automatic change of railings and a hammer mill with cylinders for certain products for poultry. The raw materials are stocked in 52 measurement cells. “All intermediate stockage silos, containers and mixers are equipped with weighing devices, explains Hans van der Weijden. That allows to operators to know at anytime where are raw materials undergoing the transformation in the process, and to control stock level.” All components of a formula can be weighed simultaneously.

The factory has 5 mixers, each one connected to a granulation line, and to 5 coolers. Each lines has a coater in order to add liquids either on cold pellets or hot according to the heat resistance of used liquids. The installation of a sixth lines has been totally anticipated.

A crumbler and a sifter are dedicated to specific food production of poultry. The factory has 96 silos of finished product and 3 loading posts whose one dedicated to bovine food.

In the end, Kalmar Lantmän considers “delighted with the quality of the tool and of the investment”. Van Aarsen reckons that he has delivered an equipment using cutting-edge knowledges in animal feeding industry field : “Hygiene, safety, automation, energy saving…”

Translated in English (Original in French)